Ever wonder what Madonna Tivos? Turns out it’s Oprah! The singer surprised the media magnate during Oprah’s surprise farewell show, and from one icon to another it was a heck of a tribute. 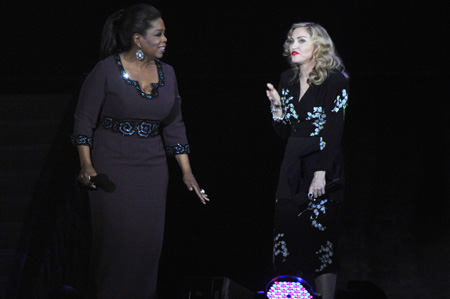 Tom Hanks introduced the Material Girl surreptitiously as a viewer from New York City, saying, “This hard-working mother of four says the Oprah show means the world to her.”

And out walked Madonna! Madge let it all hang out — all her adoration for Oprah, that is.

“It is no secret that millions of people have been inspired by Oprah and I’m one of those people.”

“She fights for things she believes in even if it makes her unpopular. She has balls and a wealth of compassion, I have learned so much from her,” gushed Madonna.

“She’s been a self-made woman who has been on top of her game for over 25 years and she is still kicking ass!”

Takes one to know one!

The final episode of The Oprah Winfrey Show airs Wednesday, May 25.

Top 10 ways the Oprah Effect has shaped our culture
Oprah by the numbers: Cool stats from the past 25 years
What’s next for Oprah’s book club?