Lindsay Lohan could use a job right about now — will her next role be the title character in a remake of the Stephen King thriller Carrie? 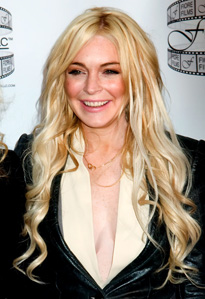 Lindsay Lohan could do with a little less negative publicity and a little more quality acting in actual movies. While her role in the upcoming Gotti movie has been switched around — and we have our doubts over whether or not the project will actually get off the ground with her in it — she has her eyes on another prize: A remake of Stephen King‘s classic horror flick Carrie.

But is this a truly viable project for Linds? Not quite. The rumor started because of something King himself said in jest.

Turns out that there is a new Carrie movie in the works — at least, MGM and Screen Gems have hired a writer to create a screenplay more faithful to King’s classic novel — but that’s about as far as it has gotten.

So how did Lohan’s name get attached? In an interview with Entertainment Weekly, King threw out some possibilities.

“I’ve heard rumblings about a Carrie remake, as I have about The Stand and It,” said the author. “Who knows if it will happen? The real question is why, when the original was so good? I mean, not Casablanca, or anything, but a really good horror-suspense film, much better than the book. Piper Laurie really got her teeth into the bad-mom thing. Although Lindsay Lohan as Carrie White… hmmm. It would certainly be fun to cast. I guess I could get behind it if they turned the project over to one of the Davids: Lynch or Cronenberg.”

Sounds like Lohan can hang her prom dress back up — this rumor is nothing more than conjecture.