Glee is heading to New York for their big season finale! Will the kids of McKinley High win Nationals? Will Mr. Schuester join the ranks of Broadway? Watch on May 24 to find out.

Everything Glee has done over the past season has led us to this moment — the season finale, called New York. 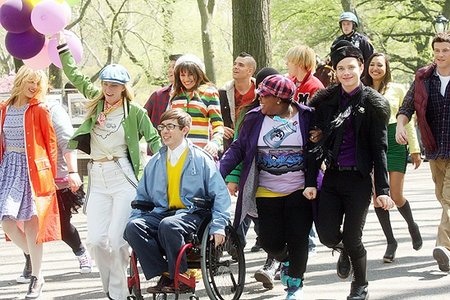 It’s time for Nationals and the kids of Glee are ready to hit the New York stage. While deep in the heart of the Big Apple the kids take in everything NYC has to offer, including famous sites and landmarks. But it’s Vocal Adrenaline they really have to concentrate on. With Sunshine Corazon (Charice) leading the New Directions’ rivals, they’ll have to bring everything they’ve got.

In Will Schuester news, the kids will finally confront Mr. Schuester (Matthew Morrison) about his intentions to move to Broadway.

A few loose ends will hopefully be tied into a nice Glee bow, including the Finn (Cory Monteith) and Rachel (Lea Michele) relationship and Quinn’s (Dianna Agron) intentions once Nationals are over.

We also can’t help wondering if Brittany and Santana will officially become an item — okay, that’s more like wishful thinking than wondering. We might be seeing the last of Jesse St. James in the finale as well. We have mixed emotions about that one.

New York will feature For Good from Wicked and Madonna’s I Love New York. Check out a preview of Glee’s finale New York and tell us what you think might happen.