The race for the Dancing With the Stars mirror ball trophy is pretty much over. Chelsea Kane, Kirstie Alley and Hines Ward left no stone unturned as they pulled out all the stops in a booty-shaking, hip-swirling finale that was highly entertaining. All that’s left to do is crown the champion.

Chelsea Kane, Kirstie Alley and Hines Ward left it all on the Dancing With the Stars floor in a final showdown for the trophy. The finalists were tasked at taking on two dances — judges’ choice and the popular freestyle dance. Here’s how it all went down. 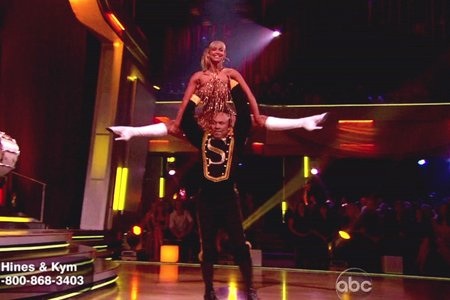 Chelsea Kane and Mark Ballas danced a samba that Carrie Anna Inaba said was, “Hot! Hot! Hot!” It was interesting to see the modern twists that Ballas added into the choreography. Their freestyle was what we were really waiting for because Mark Ballas always takes risks with his freestyles. It was all that and more. They rode out on a bike and then hit the floor hard with funk and hip hop and all kinds of crazy moves. We can’t even quote Carrie Ann Inaba because she was so excited her words didn’t really transfer into full sentences. They got a perfect 10 for that dance!

Kirstie Alley danced her samba right after Chelsea Kane wiped the floor with hers, so we give her credit for following someone who Brooke Burke pointed out was “born in 1988.” Way to make Kirstie Alley feel old. It felt like the judges were being kind and tiptoeing around the fact that it was a bit bland. They took the lift approach to their freestyle. We saw where Maks was going with this one. He added technical moves and lifts to prove she could do them — and it really worked. Len Goodman made a good point, “You gotta risk it if you want the biscuit.” Wait, what?

Hines Ward and Kym Johnson danced a quick step that left us wondering why there wasn’t smoke coming off their heels. How does he make his feet look like they’re on air? He must get those moves from the football field. Len Goodman rained on our Hines Ward parade, but that’s okay because everyone else loved him. The duo promised something never seen before in their freestyle dance and we got it — a football halftime show on DWTS! Their whole freestyle centered around a football halftime show and it was marvelous. They even had drummers and their moves were pretty killer too. Carrie Ann Inaba said it wasn’t a halftime show, “It was the whole damn Super Bowl!”

As it stands going into the results show Tuesday night, where they’ll dance one more dance, Hines Ward and Chelsea Kane are tied with 59 and Kirstie Alley only trails slightly with 54.

Who do you think is going to take the Dancing With the Stars mirror ball trophy?