J.J. Abrams and Steven Spielberg’s Super 8 is one of the few original films opening this summer. The movie centers on a group of kids whose lives are changed forever when a strange piece of cargo travels through their small town.

The plot of Super 8 is being kept under wraps, as only J.J. Abrams can and it’s driving fans mad — in a good way! This is one of the few times where the entire film isn’t revealed to us before we watch it. We don’t know what the real threat is. We have no idea what it looks like and we don’t know what damage it causes. 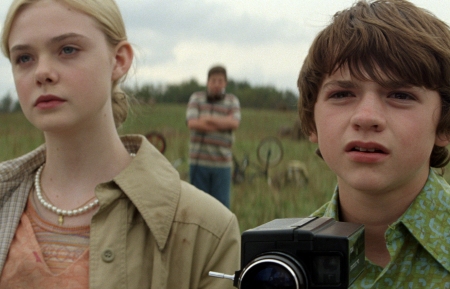 The general consensus is that the train crash shown in the trailer is caused by an alien presence. Now let’s be honest, with Steven Spielberg as the producer that’s a pretty logical guess. We know he loves extra-terrestrials. His alien obsession coupled with the ET-like score screams “not of this world.”

Not only is Super 8 taking Hollywood by storm but it’s tackling technology too! For the week of May 23, Super 8 was named the iTunes App of the Week! Yes, for a limited time you can download an application that turns your phone into a super 8 camera. It’s like a flip cam but you can add old school effects like scratches, skips and shakes.

Nostalgia is just one of the things keeping Super 8 ahead of the competition. Mystery? Check! Intrigue? Got it! Spielberg and Abrams? Check and check! Super 8 opens in theaters everywhere June 10. Are you ready to see what the darkness holds?