In just a few days the last episode of The Oprah Winfrey Show will air — but the icon’s influence will likely stretch for decades to come. Here are the top 10 ways the “Oprah Effect” has shaped our lives. 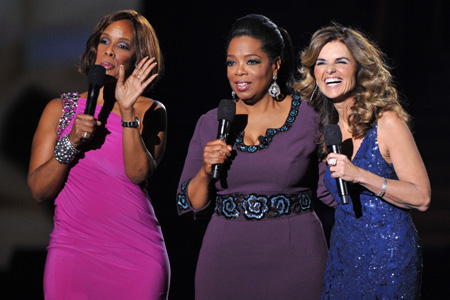 In late 2006, the “bring your own bag” movement was just starting to gather steam. After Oprah featured Ecobags on the April 2007 Earth Day episode, millions got behind the green grocery bag craze — and now multiple counties in California are banning the use of plastic bags in favor of bring-your-own.

Reading became hip again when Oprah’s Book Club started 14 years ago. From alt lit to classics, a pick by Oprah guaranteed huge paydays for authors and publishers. While she hit a stumbling block with the James Frey fiasco, the club never waned in popularity.

Back when Oprah started the Clean Up Your Messy House Tour in 2008, we had no idea what total pigs our neighbors were — and we couldn’t get enough of it. Now A&E’s Hoarders, about people whose disgusting homes are ruining their lives, is one of the most popular reality shows on television.

Want a life as fabulous as Oprah’s? All you have to do is visualize, and the power of positive thinking will get you there — at least, according to The Secret. After being featured twice on the show, the book and movie became a phenomenon. Don’t act like you didn’t make an inspiration board featuring your dream house and Johnny Depp.

Consumers thought twice about consuming red meat after Oprah aired an episode on Mad Cow disease. The show had such a dire effect on the industry that a group of Texas cattle ranchers sued the media mogul claiming she cost them $11 million in revenue. The court upheld Oprah’s right to free speech — but the publicity exposed poor slaughterhouse conditions in the Western world.

Dr. Phil, Dr. Oz, Nate Berkus — before any had their own shows they became household names on Oprah. Dr. Phil coached Oprah through the aforementioned Mad Cow disease fiasco, while Dr. Oz got everyone talking about their poop. And who could forget frequent design contributor Nate Berkus sharing the personal heartbreak of the Indonesian tsunami death of his partner?

4. Standing up to sexual abuse

In 1990, Oprah interviewed Truddi Chase, a woman suffering from dissociative identity disorder stemming from years of physical and sexual abuse. The host shared her own deep, dark secret: She too suffered the same abuse. Since then Oprah has done multiple shows on the issue, even convincing celebrities like Tyler Perry to speak up about their own pasts and giving other victims the courage to seek help and speak out against their abusers.

Bob Greene did such a bang-up job as Oprah’s personal trainer — even getting her to the doctor to have her hypothyroidism diagnosed — that the public quickly fell into step with his work, too. Now almost 20 years later, Greene is the creator of Best Life and Best Life Foods, helping make the public as healthy as possible.

As an African American girl growing up poor, Oprah never dreamed she’d one day be the world’s first black female self-made billionaire. Hoping to make the world a better place for boys and girls of color all over the world, she held candid discussions on race relations throughout the history of her show, inspiring slow change. Experts say that by having Barack Obama as a guest before he even officially announced his candidacy for president of the United States, her influence accounted for as many as one million votes.

1. Being the best you can be

If Oprah stands for anything, it is expecting nothing but excellence out of yourself. As she recently told her BFF Gayle King, “You are not the product of your circumstances. You are a composite of all the things you believe, and all the places you believe you can go. Your past does not define you. You can step out of your history and create a new day for yourself. Even if the entire culture is saying, ‘You can’t.’ Even if every single possible bad thing that can happen to you does, you can keep going forward.”

Tell us: How has the Oprah Effect influenced your life?