If the company American Idol finalists Lauren Alaina and Scotty McCreery keep is any indication of their future careers, they’re on the fast-track to stardom. The duo, who will belt it out for the American Idol crown, will share the stage with none other than U2 on Wednesday night. 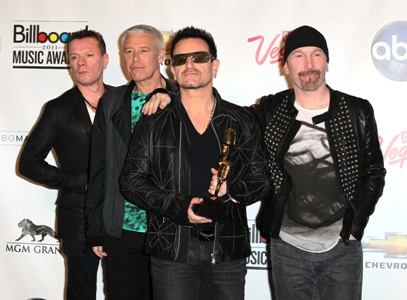 Fresh off their Top Touring Artist Award win at the Billboard Music Awards on Sunday night, U2 is heading to the American Idol stage for rehearsals. Bono, the Edge, Adam Clayton and Larry Mullen Jr. have been confirmed by their longtime manager as a sure thing for the American Idol finale.

Speaking of their Billboard win on the all-time biggest tour, guitarist the Edge commented, “It’s always a thrill to win an award, but something about this really connected when I realized that more people had come to this tour [than] any previous tour. Seven million people — I still can’t quite get my head around that figure. It’s so astonishing, and just feels really good.”

U2’s American Idol finale performance is poised to bring in a staggering amount of viewers as well. Last year’s finale, in which Lee DeWyze beat out Crystal Bowersox, was watched by an astounding 24.22 million people.

No word yet on what song U2 will perform, but we do know that Lauren Alaina has the coveted last song of the night. Looks like the American Idol finale is shaping up to be quite a show!