Pirates of the Caribbean: On Stranger Tides sailed into a win for its premiere weekend, but the real booty came in Johnny Depp and Penelope Cruz’s record-breaking international opening. Bridesmaids partied past last week’s winner, Thor, to take second. 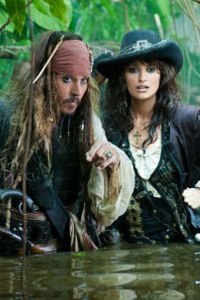 Pirates of the Caribbean: On Stranger Tides had a decent opening in North America, banking $90 million to win the May 20-22 weekend, but the sequel stole its real booty from the overseas market. The fourth Pirates of the Caribbean premiere banked $256.3 million internationally, breaking Harry Potter and the Half-Blood Prince‘s $236 million record.

While $346.4 million is an impressive worldwide opening, if the box office race was based on turnout, Pirates wouldn’t even make the top 20 stateside. Jack Sparrow was expected to perform better in the US, especially as he was making his first bid for those big, juicy 3D ticket prices and had a new lady, Penelope Cruz, on his arm. With the movie getting good word of mouth, next week could go better, unless the two big new releases stand in the way. Regardless of what comes, Disney is still hoping to make the billion dollar mark by the end of Pirates of the Caribbean: On Stranger Tides‘ run in theaters.

Bridesmaids stars Kristen Wiig, Maya Rudolph, Rose Byrne, Melissa McCarthy, Ellie Kemper and Wendi McLendon-Covey brought the party to the theaters again this weekend to catch the second place bouquet, with $21.1 million. Tack on the overseas take and the comedy has surpassed the coveted $100 million mark.

Mighty Thor got bumped from its two-week reign to land in third place this weekend. The new $15.5 million take brings the North American total to $145.4 million, so far. Add the $247 million from overseas and yes, that likely equals some kind of Thor sequel down the road.

Fast Five still had the drive to stay in the game. The Vin Diesel, Ludacris and Tyrese Gibson flick banked $10.6 million more this weekend to land in fourth. With the worldwide bank now at over $506 million, more sequels likely to come here, as well!

Rio is yet another big performer keeping pace in the top five. The $4.7 million weekend is a big drop from Fast Five‘s fourth place numbers, but brings Anne Hathaway, Jamie Foxx and Jesse Eisenberg’s 3D animated take to $131.6 million in North America and a whopping $445.3 million worldwide.

Priest falls to sixth with $4.6 million, followed by the wedding comedies Jumping the Broom and Something Borrowed, which took $3.7 and $3.4 million, respectively.

Water for Elephants banked only $2.2 million. Needless to say, the Reese Witherspoon and Robert Pattinson drama didn’t quite meet expectations, but the worldwide take is nearing the $100 million mark.

Next week could be a big shakeup for the box office. May 26 sees The Hangover Part II hitting the big screen, along with Kung Fu Panda 2. That’s two blockbuster follow-ups, along with 3D prices for the Panda.

The weekend of May 27 will also see limited releases for Tuesday, After Christmas and Tree of Life, which stars Brad Pitt and Sean Penn. Puzzle, Tied to a Chair and United Red Army will hit New York theaters.