Buzz on Ashton Kutcher’s new deal has the goofy stud only signed on to Two and a Half Men for one $20-million year. According to the rumblings, that’s not so Charlie Sheen can get it together, make amends and return next season, that’s just how long Men‘s current deal with CBS is. So if the show gets another year, so might Kutcher… or not.

New buzz on Ashton Kutcher’s deal with Warner Bros’ Two and a Half Men has gone viral, but take the chatter with a grain of salt. With the Wall Street Journal sourcing unnamed “people close to the situation” for the info, there’s been no official confirmation from Kutcher, Warner Bros or CBS. 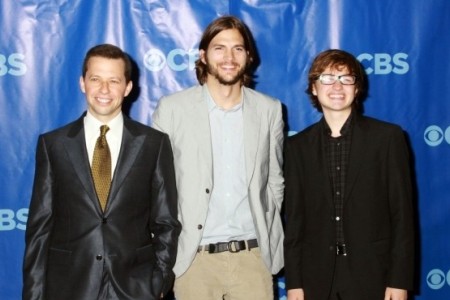 According to the buzz, Kutcher has only signed on to replace Charlie Sheen on Two and a Half Men for one season, which equals 22 to 26 episodes. Kutcher will bank $750,000 per episode, plus additional fees, with no obligation or invitation to return in the 2012-2013 fall season.

In other words, next year Kutcher could walk away, Men could find a new man, the union could continue or the show could go away, altogether. Though both CBS and Warner Bros would like to see the show continue to perform into the unforeseeable future, CBS has only picked up the hit show for this next 2011-2012 season, according to the story.

It seems the powers that be are going to wait and see how Two and a Half Men holds up without Sheen, who got canned back in March. If the show looks ripe for another pick-up, however, there will likely be more negotiations ahead for CBS and Warner Bros, and potentially for Kutcher, as well.