Zach Galifianakis is no fan of January Jones. The star of The Hangover 2 says their first meeting was awful — and it was her fault! 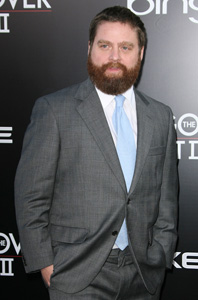 It’s a pretty safe bet that Zach Galifianakis is not the father of January Jones’ baby. The funnyman says he is no fan — because the actress was incredibly rude to him the first time they met.

More accurately it was a mutual rudeness, but she definitely started it.

In a recent interview with TheShortList.com, Galifianakis expressed shock when told the Mad Men actress named him as one of the funniest men in Hollywood.

“That’s really funny because, if I remember correctly, she and I were very rude to each other,” said the star of The Hangover 2.

“So I say, ‘January, you are an actress in a show and everybody’s going to forget about you in a few years, so [expletive] be nice,’ and I got up and left. And she thinks that’s funny.”

That is pretty funny actually, as long as you’re not on the receiving end.

So definitely no sexy times between him and January Jones then, not even on screen?

“I wouldn’t want to,” Galifianakis shuddered. “I’d hate it.”

Tell us how you really feel, Zach!