As we previously reported, a bevy of celebrities turned up at Chicago’s United Center for the Surprise, Oprah! A Farewell Spectacular taping. Well, part one has finally aired. Did Oprah Winfrey break out the ugly cry? Read on to find out.

When Oprah Winfrey’s crew put together a who’s-who list of celebrities for the queen of talk’s Surprise, Oprah! A Farewell Spectacular taping, we have to admit, we were curious as to who was going to be involved. 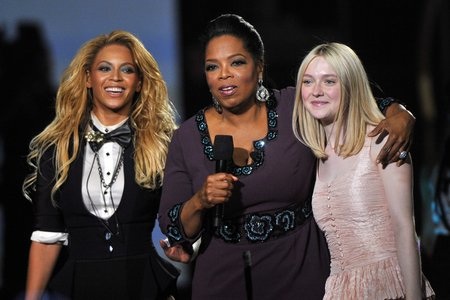 By now it’s no secret that Tom Hanks played master of ceremonies, bringing all of Oprah’s friends and fans together to say a fond farewell through taped packages and live tributes. If you were living under a rock over the past week and didn’t hear all the buzz surrounding the evening’s events, it’s okay. Here are a few moments from part one that were talked about, but transferred so much better emotionally once aired. We’re looking for the Oprah ugly cry here, people.

As expected, Tom Cruise, Madonna, Beyonce and Halle Berry all showed up to celebrate Oprah Winfrey in the first part of the extravaganza. It was much cooler watching Tom Cruise walk out to the Mission Impossible theme than it was hearing about it. It was even more emotional to listen to him utter the very phrase Oprah Winfrey advised us all to believe in: “You always had the power and that is the lesson you brought.” She almost broke out the ugly cry when Josh Groban and Patti LaBelle serenaded her with Somewhere Over the Rainbow — but she held it back — darn.

Another big moment was Dakota Fanning speaking for the young girls of the world who have been inspired by Oprah Winfrey. The talk show host looked on as Fanning introduced girls who have lost weight, dreamed big or just changed their lives because of Winfrey’s wisdom. Beyonce also took part in the young female generation, showing girls can run the world. Her stage performance of Run the World (Girls) was absolutely sick — in a good way.

Oprah wiped her eyes when John Legend announced 25 libraries across the country would be rebuilt and she got a little misty eyed when Diane Sawyer told her 25,000 oak trees would be planted in honor of her 25-year reign — nope, not time for the ugly cry.

If you really want to talk emotional, imagine the United Center lights dimmed while Rascal Flatts sang I Won’t Let Go with lyrics like “I will stand by you” and “I will fight your fight” filling up digital panels across the center. We ugly cried but Oprah did not.

We think she’s saving the ugly cry for Wednesday’s finale, but there’s still part two of the Surprise, Oprah! A Farewell Spectacular to air on Tuesday — maybe she’ll break it out then. She is a poised lady, you know.