Justin Timberlake hosted the season finale of Saturday Night Live with musical guest Lady Gaga this week and it was off the hook. Timberlake brought back a favorite while Gaga joined in on some SNL Digital Short fun.

Justin Timberlake returned to host the season finale of Saturday Night Live this week, only this time he wasn’t the musical guest — Lady Gaga was. Although with the funny she brought to her cameos, we’re starting to wish all the sketches featured a Timberlake-Gaga theme. 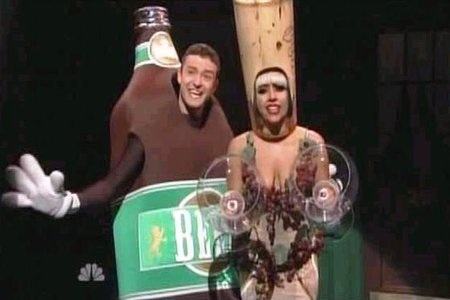 In the first sketch, Justin Timberlake dressed as a beer bottle while corner battling a lady dressed as a tea bag (Kristen Wiig) — think of all the jokes on that one. He asked us to “bring it on down to Liquorville.” He brought it back, people! The best part? Lady Gaga joined the mix as the wine!

Probably the most anticipated point in the evening was the return of Andy Samberg and Justin Timberlake’s Digital Short antics — they did not disappoint.

Timberlake and Samberg broke out the old [Expletive] in a Box garb, grabbed Susan Sarandon and Patricia Clarkson, and serenaded us with some sweet naughty lyrics. But Sarandon and Clarkson’s cameos were short-lived as the boys ditched the ladies for a three-way with Lady Gaga! 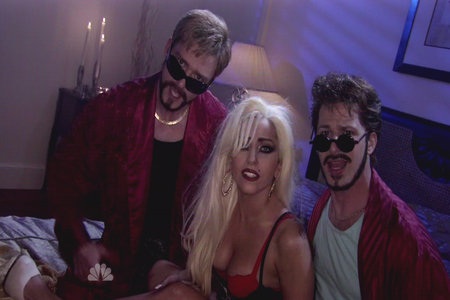 That’s right, we give you the latest Digital Short from Samberg and Timberlake: 3-Way (The Golden Rule). Lady Gaga joined the duo in some hysterical three-way action that at one point seemed to just be about the dudes. There was a lesson to be learned here: “It’s OK when it’s a three-way.” The tribute to Three’s Company was classic!

What did you think of Justin Timberlake’s latest Saturday Night Live sketches? Did you notice Jimmy Fallon’s return in the Barry Gibb Talk Show sketch?