Lady Gaga was tossed in the trash by schoolyard bullies who taunted her not to cry, says the singer. 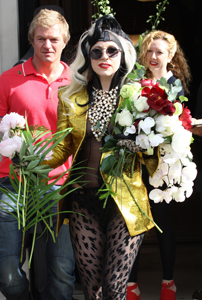 Lady Gaga is trashy — literally. The Born This Way singer says she was tossed in a trash can by high school bullies who humiliated her in front of her classmates.

“The boys picked me up and threw me in the trash can on the street, on the corner of my block while all the other girls from the school were leaving and could see me in the trash,” Lady Gaga says in her upcoming MTV special Lady Gaga: Inside On the Outside.

“Everybody was laughing and I was even laughing. I had that nervous giggle… I remember even one of the girls looking at me like, ‘Are you about to cry? You’re pathetic.’ That’s what it felt like, you’re pathetic.”

What healed her old wounds? Her little monsters.

“I think it took me to get to know my fans and to see similar struggles in them to access that wound in myself,” she explained.

Lady Gaga: Inside On the Outside airs May 26 on MTV.