Libertines singer Pete Doherty has been sent to jail for six months after being filmed smoking crack a day before documentary filmmaker, Robyn Whitehead, died from a drug overdose. 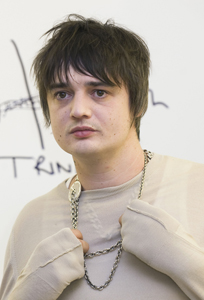 Punk singer Pete Doherty was sent to jail for six months on drug charges by a judge who called his record “appalling.”

Doherty, lead singer of the Libertines and ex-lover of supermodel Kate Moss, was videotaped smoking crack by filmmaker Robyn Whitehead just a day before she died of a heroin overdose.

“Any claim that this defendant somehow glamorizes drug use is misguided,” said Doherty’s attorney Peter Ratliff. “He takes no pleasure in his addiction. It’s one thing he’s said publicly, he would not wish upon his worst enemy. He is acutely aware of the agonizing nature of addiction.”

Doherty’s last big drug scandal happened when photos surfaced of Kate Moss snorting what appeared to be lines of cocaine in a recording studio with the rocker. She immediately shipped off to rehab and saved her multi-million dollar modeling contracts.

Whitehead’s death has not been attributed to Doherty, as the drugs found in her system were not the same type she was seen smoking with his pal Peter Wolfe in the video.

“Unhappily and tragically that woman died from the poisoning of another illegal class A drug which she had chosen to take,” said Judge David Radford. “The grief and loss to her family and friends caused by her death cannot, and should not, be sought in any way to be expiated by the sentence I pass today.”

Doherty was immediately remanded into custody to begin his third prison term.