Haley Reinhart was voted off American Idol, leaving her with a third place finish. As she says goodbye to the final two, Scotty McCreery and Lauren Alaina, what is next for the Illinois native with the raspy voice?

Even though Haley Reinhart was eliminated from American Idol on May 19th, it should come as some reassurance that this week’s voting numbers (95 million!) equaled the largest sum in Idol’s non-season finale history! Does that bode well for her post-American Idol career? 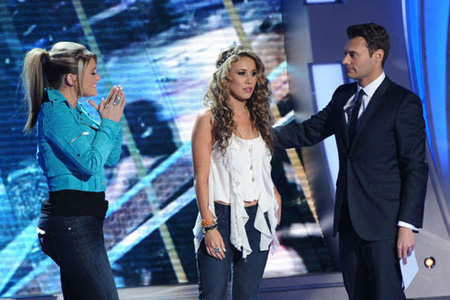 As we watched Reinhart sing her final swan song, Elton John’s Bennie and the Jets, we couldn’t help but wonder, what is next for her? The blogosphere is already buzzing about the “Third place American Idol Curse,” naming cursed contestants who faded away after reaching third place status, including Nikki McKibbin from season one, Kimberley Locke from season two, Melinda Doolittle and Jasmine Trias. None of the names ring a bell?

Reinhart, however, seems to be taking it all in stride and is focused on the future, telling Billboard she wasn’t angry, but “surprised.”

“All in all I accepted it very quickly and took it in, took it all with a grain of salt and said, ‘Hey, everything happens for a reason. This is a good thing.’ This happened for a reason, and it only means that I’m going to start my career as a solo artist even sooner,” she said.

Reinhart says she has an idea what she wants her first album to be. “I would love to do an album that’s like sultry, bluesy rock. I absolutely love jazz, so if I can slip that in there somewhere or even in the future get more into jazz… (But) I definitely am loving the sultry, bluesy rock feel.”

She revealed she would love to work with Corinne Bailey Rae, Esperanza Spalding and Janelle Monae — as well as Steven Tyler. “I love classic rock. Just growing up with rock ‘n’ roll in my life, if I could do something with him that would be fantastic.”