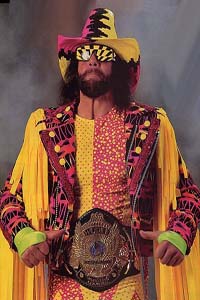 Savage, 58, suffered a heart attack while driving in Tampa, Florida. His brother, Lanny Poffo, told TMZ that Savage lost control of his car after the heart attack.

The wrestling superstar was known for his signature catch phrase “ohhhh yeah” and for his longtime endorsement deal with Slim Jim beef snacks. You know, the one with the tag line “snap into a Slim Jim!” He managed to carve a niche career for himself outside of wrestling, just like fellow WWE superstars Hulk Hogan and Dwayne “The Rock” Johnson.

“There has never been a Superstar more colorful than ‘Macho Man’ Randy Savage. His style — perfectly punctuated by his entrance music, Pomp and Circumstance — has only been outshined by his performance in the ring,” the WWE has said of one of their most recognizable faces.

Savage was in the midst of a career resurgence within the past couple of years — fans campaigned to get the wrestler inducted into the WWE Hall of Fame and he was featured on a WWE video game released earlier this year.

“Randy Savage will appear in the latest THQ video game coming out this year. ‘WWE All Stars’ will feature the Macho Man Randy Savage in what is clearly the rebirth of the Macho Madness movement,” the video game maker said in 2010.

And if the news isn’t sad enough, Savage just celebrated his one-year anniversary with his wife, Lynn.