Lindsay Lohan still likes the boys, even after her steamy affair with Samantha Ronson! 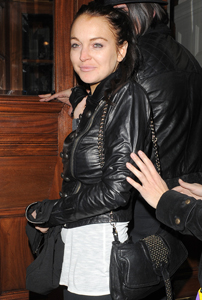 Lindsay Lohan isn’t all about Eve after all — the actress says that despite her steamy affair with Samantha Ronson, she is still into guys.

During a Skype interview with Australian radio’s The Kyle and Jackie O Show, Kyle asked, “We’d love to know whether you’re like a lesbian or whether you’re a bi… ’cause boys wanna know if they still have a chance… have we still got a chance?”

What guy wouldn’t want to bring Lindsay home to mom?

And about those nasty little comments Glee made about Lohan in the first Gwyneth Paltrow episode… Lindsay says she doesn’t watch the show but they could use her music.

“I don’t watch Glee… Yeah [they can use the music], but they’ve made a lot of snarky remarks about me, and I don’t know why they need to do that.”

Because you make it so easy, Linds.

Lohan is due to surrender herself to jail on June 17 where it is expected she will be fitted with an electronic monitoring bracelet and serve her time for her probation violation and theft charge under house arrest.