American Idol voters produced a record-breaking number of votes on Thursday’s results show, putting into motion a country finale between Scotty McCreery and Lauren Alaina. Are fans ready for this boy-girl showdown of epic twangs?

Thanks to Scotty McCreery and Lauren Alaina’s similar country vocal stylings, fans of American Idol could be getting a very specific finale. 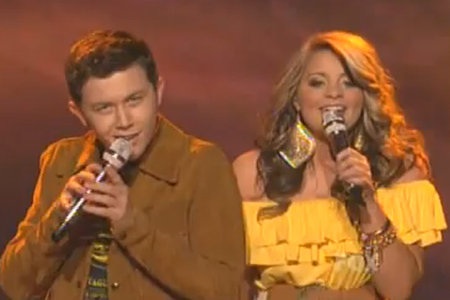 The 95 million votes that came in speak volumes as to who the voting public was behind, but are they ready for a finale that could end up sounding very vanilla? On the flip side, the two finalists could bring a few tricks we haven’t seen before — shocking us in the process. It’s obviously 50/50 as to how this will go down.

Scotty McCreery, a 17-year-old Christian boy from North Carolina who worked in a grocery store before his Idol days, has stuck firmly by his deep-voiced country roots, but he’s also managed to put a young spin on some of the more classic country songs. He’s your classic-sounding country artist, with a hint of modern-day youth thrown in. He’s shown that off by sticking with songs from artists like Alan Jackson and Josh Turner.

Sixteen-year-old Georgia peach, Lauren Alaina, also brings her Southern charm into the finale. Alaina’s soulful country voice has lent a different version of the genre to the stage. While Scotty has a traditional twang to his vocals, Lauren has a raspy, young hint of country pop to hers. She’s chosen to showcase that by going with tunes from Faith Hill, Lee Ann Womack and Miley Cyrus.

Do you think our American Idol finalists are too similar to deliver an awe-inspiring finale or can they deliver two very different shows?

Don’t forget to check out part one of the finale on a new day, Tuesday, May 24.