Katie Couric said goodbye to the CBS Evening News Thursday, where she had spent five years as the first woman in a network nightly news anchor chair.

Katie Couric bid farewell to viewers in her last appearance as host of the CBS Evening News Thursday night, ending a five-year run that saw low ratings for the network and little professional satisfaction for the news woman. 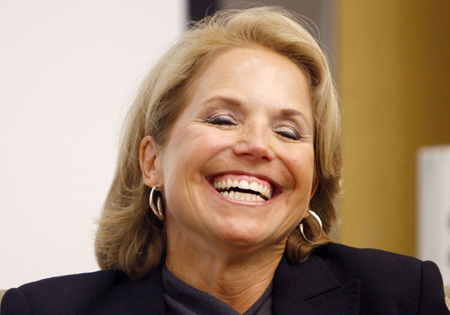 In the final moments of her last broadcast, Couric presented “five years in five minutes:” A highlights reel of some of her best interviews and biggest news stories from her time behind the desk, including Presidents Bush and Obama, Sarah Palin, Alex Rodriguez and hero pilot Chesley Sullenberger.

“It’s been an extraordinary privilege to sit in this chair and a real honor to work with so many talented people at CBS News,” Couric said.

“Thank you for coming along with me on this incredible journey.”

Couric is rumored to be taking on a daytime talk show and news work at ABC, possibly filling the void that will be left when Oprah goes off the air next week. Scott Pelley is taking Couric’s place in the anchor chair on CBS.