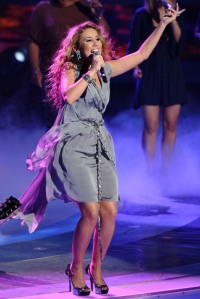 Nicole Scherzinger and 50 Cent rocked anAmerican Idol top three results show that pulled in a record-breaking number of votes. But that’s not why we were really watching.

It was an emotional night for Scotty McCreery, Lauren Alaina and Haley Reinhart as they looked back on their hometown trips and learned of their fate. Of course, the hometown trips featured the typical fan outpouring of love for their heroes, but like the rest of the heroes of the world, one had to fall.

American Idol dream dasher Ryan Seacrest didn’t bother to do the typical bottom results portion because, well, there were only three left to find out the news on who was going to the finale.

Scotty McCreery was the first lucky contestant to make it through with Lauren Alaina following right behind. Haley Reinhart made a good attempt but this country showdown was weeks in the making.

Who do you think is going to rock the Nokia Theater in LA? Will Scotty McCreery or Lauren Alaina be your next American Idol?

Don’t forget to make special note of the day switch for the finale. The performance portion will go off on Tuesday, May 24, with the results coming your way on Wednesday, May 25.