Lindsay Lohan has filed a restraining order against a stalker that has been harassing her for years. His recent behavior, including a lewd text message, has Lohan scared that he will sexually assault her. 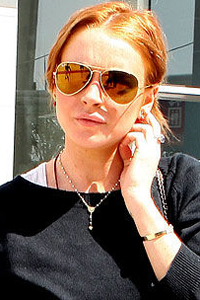 Lindsay Lohan is on the other side of the law this time, as she filed a temporary restraining order against her alleged stalker named David Cocordan. She says this man has been stalking and harassing her for two years, however, his behavior has escalated over the last four weeks.

Cocordan has reportedly come to her home three times, has called her, sent her hundreds of text messages and followed her to public places. Scary!

LAPD’s Threat Management Department is taking this seriously, as they feel Cocordan has “mental issues and is schizophrenic.”

Lohan decided to file the restraining order after Cocordan sent her a text message on May 5th, saying: “(Expletive) n sucking with u kkk I need it more thn.”

“I am afraid that this text message shows that Mr. Cocordan intends to sexually assault me,” Lohan said in the restraining order.

On Monday, Lohan posted a picture of her stalker and tweeted: “This is the freemason stalker that has been threatening to kill me — while he is TRESPASSING! im actually scared now — the blood in the ‘cults’ book was too much. All my fans, my supporters, please stand by me. g-d bless xxL”

Lohan has removed the photo and the message, however, the restraining order will forbid Cocordan from making any contact with her.