Actress Rosie Perez is suing Law & Order: SVU after sustaining a neck injury while on set two years ago. 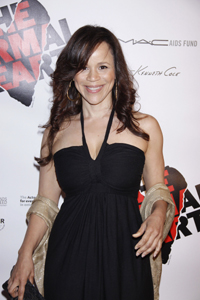 Rosie Perez is suing the production companies for Law & Order: SVU because she says they should have used a stunt professional during one particular fight scene, resulting in her sustaining a neck injury.

The accident happened two years ago when the actress was filming a scene in which she was fighting with another actress through the window of a car. Another actor, playing a passerby, pulled Perez off the actress. The filming required several takes, resulting in Perez’s neck herniation.

Perez’s attorney, Brian O’Dwyer, said that she has had severe pain and numbness in her arms and has been out of work for a year. She had to undergo a discectomy and fusion of her vertebrae.

“This is a case of a woman being severely injured because someone wasn’t taking care of the people who work for them — and we’re going to make them pay,” O’Dwyer said.

The White Men Can’t Jump actress had to drop out of the A Free Man of Color production in November because of the injury.

O’Dwyer doesn’t say how much they are seeking in damages, only saying a “very, very substantial case” because Perez has been unemployed for “quite a while.”