David Letterman went on a rant on his Late Show because, despite years of sucking up, he wasn’t invited to Oprah’s grand finale gala! Maybe his invitation got lost in the mail? 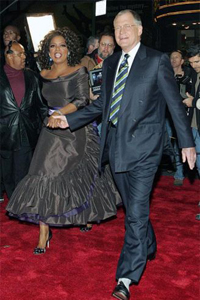 Some of the biggest names in Hollywood attended Oprah’s farewell spectacular in Chicago — including the Toms (Hanks and Cruise), Will.i.am, Madonna, Beyonce and Jerry Seinfeld. Everyone, that is, except David Letterman.

“Guess who wasn’t invited? Well thank you very much, Oprah!” Letterman said. “I’m disappointed and crushed. I want to bask in the glory that is Oprah! Who doesn’t?”

The talk show host said he has “spent the last 12 to 15 years kissing up to Oprah” and he was disappointed he did not get an invite to her gala.

Oprah and Letterman have always had a somewhat volatile relationship — and he actually admitted that she scares him a little.

“In the beginning, Oprah frightened me… because she could squash me like a bug. She could put me out of the business. And she hated me, that’s what it was,” he told Jon Stewart.

He said that Oprah has been mad at him since he found himself having lunch at the same restaurant as Oprah and he jokingly sent his lunch bill to her table.