Pirates of the Caribbean: On Stranger Tides, starring Johnny Depp, has brought the Pirates franchise back for a fourth go-around and has us asking: Is it really that good, or just so much better than the previous two?

Let’s be honest to start things off: We could watch Johnny Depp as Jack Sparrow read the dictionary and we would sign up. Depp’s Sparrow is one of the great characters in recent cinematic memory. Pirates of the Caribbean: On Stranger Tides has lost Orlando Bloom and Keira Knightley’s characters and made a few astounding additions with Penelope Cruz as Angelica and the impeccable Ian McShane as Blackbeard, the most notorious pirate of all time. 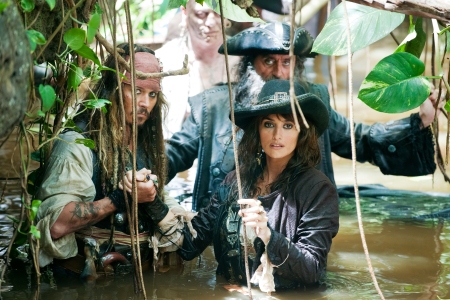 The casting of Cruz is utter brilliance. Her back and forth with Depp, first established when the two starred in Blow over a decade ago, is worth the price of admission right there. The backstory is Cruz’s Angelica had a romantic entanglement with Depp’s Captain Sparrow years ago that left her heartbroken.

Pirates of the Caribbean: On Stranger Tides begins in London with two parallel storylines.

First, someone who is claiming to be Jack Sparrow is gathering a crew in search of the legendary Fountain of Youth. Secondly, the real Jack Sparrow is in London attempting to break his good friend out of prison and return to the high seas doing what he does best: Pirating. When audiences first see Depp as Sparrow, it is an utter treat and delightful surprise — which we won’t spoil! 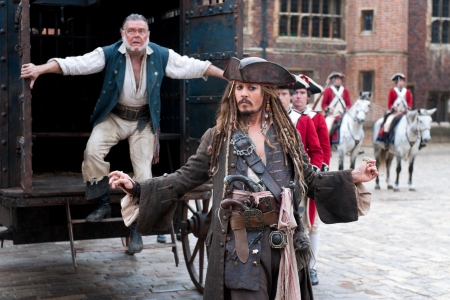 While in London, he hears about “Jack Sparrow” gathering a crew and he is determined to get to the bottom of it. Enter Penelope Cruz and their first swordplay is indicative of the two’s chemistry throughout: It is crisp, deeply sensual and completely entertaining.

Meanwhile, Geoffrey Rush’s Barbossa has gone royal. His character’s pirate ways have given way to helping the crown secure the seas as well as beat the Spanish monarchy who themselves have launched an all-out effort to also find the Fountain of Youth.

After an insanely choreographed escape sequence through the streets of London, Depp’s Sparrow finds himself on a pirate ship with Cruz’s character manning the ship’s wheel. Thinking she is working alone, Depp stages a mutiny, only to discover the ship is in fact Blackbeard’s.

This Pirates has fewer sea battles than the previous incarnations, yet it still cooks with suspense and expertly crafted action sequences thanks in large part to the franchise’s new director, Rob Marshall. The director of the Oscar-winning Chicago is right at home helming Pirates of the Caribbean: On Stranger Tides. His musical background is a perfect synergy for the Pirates film because it is tightly choreographed and, yes, even has a rhythm that feels like a musical movie in many ways, minus, of course, the singing. The film is much shorter than the previous two films and we believe that has everything to do with Marshall’s direction.

Even though Cruz, McShane and Marshall are great additions to the Jerry Bruckheimer-produced franchise, perhaps the most delightful plus is the introduction of new supernatural beings of the high seas: Mermaids. Pirates of the Caribbean: On Stranger Tides’ mermaids are, frankly, vicious. In order to discover the Fountain of Youth, it is established that you need one teardrop from a mermaid. Good luck getting that. These creatures are fearsome, fantastical and ferocious. 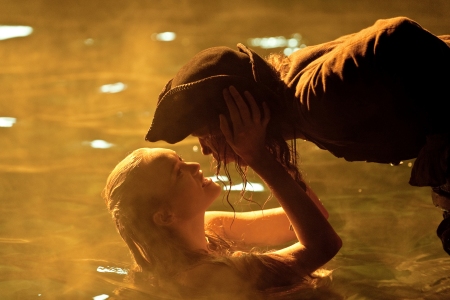 In the end, the latest Pirates film is an utter delight. It is 100 times better than the last two and comes in only slightly below the first film. Will we see a Pirates 4 or 5? With this team in place, let’s hope so!

Check out our interview with Johnny Depp!>>

Pirates of the Caribbean review

Out of five stars

Pirates of the Caribbean: On Stranger Tides trailer