It seems like the trouble is just beginning for Arnold Schwarzenegger: A second mistress has stepped forward and is already being repped by Gloria Allred! 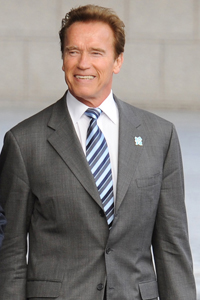 The hole in which Arnold Schwarzenegger has dug himself is getting deeper and deeper. A second woman has come forward saying she too was the Sperminator’s mistress — and she has already hired Gloria Allred to rep her.

Who is the mystery woman? Former child actress Gigi Goyette, a woman who has been tied to Schwarzenegger in the past.

“I represent Gigi Goyette, who had an intimate relationship with Arnold,” Allred told E! News. The attorney refused to elaborate on why Goyette sought legal counsel, but Allred is infamous for taking on celebrity mistresses.

So what’s the story with Goyette? According to RadarOnline, she first had a fling with Arnold back in 1975 when she was a 16-year-old bit player on Little House on the Prairie. Fast forward to 1989, three years after Schwarzenegger married Maria Shriver, and the pair turned up the heat on their affair once more.

In fact, according to the Los Angeles Times, Goyette was one of many women who claimed sexual impropriety when Schwarzenegger made his initial bid for California Governor — but, the paper says, Arnold created an agreement by which he would lend his name to the masthead of two magazines owned by American Media Inc. (a company that owns the National Enquirer, Star and Radar) and in exchange, the media conglomerate paid Goyette $20,000 to keep her mouth shut.

Maybe Jane Seymour’s prediction is right. Who knows how many other women will come crawling out of the woodwork — with or without babies.