While Paris Hilton is usually more than enough entertainment for one party, one person was conspicuously absent from the premiere of The World According to Paris: Her co-star Brooke Mueller. 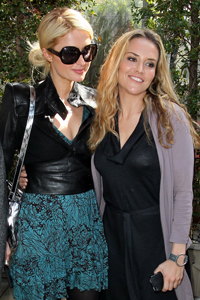 Bummer! After months of work, Brooke Mueller missed the premiere of The World According to Paris — the reality show she filmed with Paris Hilton — because she didn’t trust herself to stay sober during the bash.

A source told E! News that Mueller skipped the party because “it’s still not a good idea for her to be in a nightclub scene.”

“Brooke has been bombarded and hiding from paparazzi since it was announced that Ashton was taking over for Charlie on the show,” a pal of Charlie Sheen’s ex said. “She didn’t want to have to answer all those questions last night and she is staying out of the club scene.”

While we hear that many of Brooke’s scenes hit the cutting room floor, some of her struggles with sobriety are still portrayed in the show.

While we’re sure Paris was more than happy to keep all the attention for herself, at least her mother had the grace to make mention of her missing co-star.

“Brooke, we r sorry u could not be with us tonight, we know your working on a bigger celebration your sobriety, we r very proud of u. XO,” Kathy Hilton tweeted. “Part 2 to brooke — We luv & support u all the way! Luv Kat.”

The World According to Paris airs on Oxygen starting June 1.