Victoria Beckham wants a July 4th baby! The British fashion designer and her hubby, David Beckham, have reportedly scheduled a c-section on Independence Day here in the US. So why aren’t they giving birth in Britain?

Victoria Beckham plans on giving birth to her fourth child here in the US! The fashion designer and her soccer stud husband, David Beckham, plan on having their baby girl on the 4th of July. She has reportedly scheduled the c-section at a private hospital in Los Angeles. 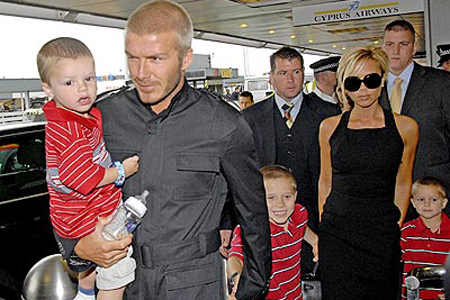 Why here in the US and not in her home country of Britain? “Victoria and David love America, its culture and her people, who have welcomed them with open arms. The most important thing is the health of mother and baby and things can always change at the last minute,” a source told The Sun. “But if it’s possible for the baby to be born on Independence Day, Vic and David would be thrilled.”

The Beckhams, including sons Brooklyn, 12, Romeo, 8, and Cruz, 6, purchased a home in Los Angeles in 2007 after David started playing for the Galaxy soccer team.

“It’s going to be a massive family affair in America. While the date hasn’t changed, it was decided a Los Angeles clinic would be best for the immediate family,” the source says.

They named their son Brooklyn — because they were in Brooklyn, New York when they found out they were pregnant. They are now rumored to be naming their baby girl… Atlanta!

“David wanted a name that was relevant to their lives during the conception,” the source overshares.

David and Victoria have not confirmed their July 4th baby news yet, so we will soon find out if this is real — or rumor!