Arnold Schwarzenegger spent tons of money on the mother of his love child — and the untenable situation has driven Maria Shriver straight to the offices of a high-powered divorce lawyer! 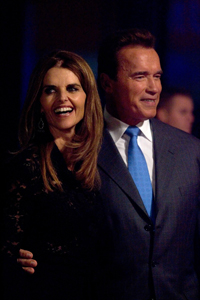 How do you buy the silence of the mother of your secret love child? Presents. Lots and lots of presents. Arnold Schwarzenegger reportedly dropped some crazy cash on his housekeeper/mistress to keep her quiet — all under the guise of being a good employer.

Neighbors of Mildred Patty Baena say she told them Schwarzenegger, her former employer, helped her buy her four bedroom Bakersfield, California home complete with a pool and basketball court — a home she shares with Arnold’s illegitimate kid and her four other sons.

TMZ reports that Schwarzenegger even picked up the tab for a lavish quinceanera party for the woman’s niece, including limos, the venue fee, food, entertainment, decorations — the whole nine yards. Schwarzenegger even spoke at the event, telling the crowd he did all of it because he wanted to “take care” of the family he had been close to for so many years.

Maria Shriver is understandably not amused by the news, and has hired top-notch divorce attorney Laura Wasserman to represent her — although she has yet to file any legal papers. Wasserman, who has repped half of Hollywood including Angelina Jolie, Britney Spears and Christina Aguilera, is said to have been hired to get all of Maria’s financial ducks in a row so she can lay the hammer down on Arnold when she does finally file for divorce.