A tense season of baby drama and hospital politicking comes to a close tonight on Grey’s Anatomy, packaged in more drama, of course. With the new chief resident set to be picked before the credits roll, the May 19, 2011 Grey‘s season finale sees Meredith in the hot seat over manipulating Derek’s Alzheimer trial and Cristina pregnant — yes pregnant, and that’s just the half of it! 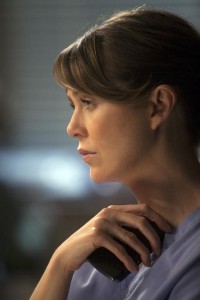 “Last year, the finale was about something external coming in and forcing our characters to cling to one another for dear life,” Sarah Drew (April) told TV Guide. “This finale is about something internally that implodes and ends up breaking relationships and tearing people apart.”

That something would be Meredith (Ellen Pompeo) messing with Derek’s Alzheimer trial. When Alex (Justin Chambers) dropped the bomb on his competition for chief resident last week, he didn’t actually say what she’d done.

Now, hoping to save Meredith and the medical trial, Derek (Patrick Dempsey) and the Chief (James Pickens, Jr.) give Mer an out. She refuses to reveal that she switched things up to make sure the Chief’s wife (Loretta Devine) got the good stuff instead of the placebo, but swears her machinations will have no affect on the study’s outcome.

Too bad that may not be enough to save her job, her husband’s Alzheimer trial, Seattle Grace’s reputation — or her marriage.

When Derek finds out what his wife did, it could be the end of their sticky-note turned legit union. Amid all this, the hospital’s power couple finally gets to take home new baby Zola, but what happens if they’re no longer a couple? 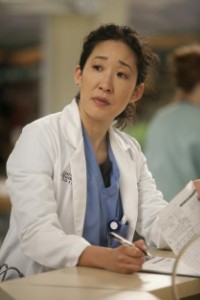 This season of Grey‘s Anatomy has been rife with folks trying to have, save and adopt babies, but it’s a whole different ball game when Cristina (Sandra Oh) realizes she’s pregnant. The ambitious type-A surgeon has no inclination to see it through, but her hubby has other ideas.

Cristina didn’t make the cut for chief resident, but that’s because Owen (Kevin McKidd) understands that his surgeon wife needs to cut, period. Now, he’s just as confident that she can balance that need and growing their baby, without sacrificing her career. She’s not so interested.

“It’s going to create a huge amount of drama between Cristina and Owen,” Drew teased. “It became clear a few episodes ago that he was really excited to have children and she was like, ‘Are you kidding? Do you know me? No, never.’ That is going to present a huge issue in their relationship and marriage.”

Teddy is also starting to look less than sure about things. It seemed the Teddy-Henry divorce of convenience would go as smoothly as the marriage did, but breaking up is never convenient — especially if someone has feelings.

With Teddy and her beau (James Tupper) set to leave Seattle before Henry goes in for his big surgery, Henry’s feeling a bit abandoned. Is it really because they’re best friends, or will the two finally admit there’s more going on there?

Oh, and there’s some medical stuff too!

Amid all this, Owen will post his pick for chief resident. Alex and Meredith were looking like the lead contenders, but after Alex played rat to take Mer out of the game, it’s anyone’s game!

The Seattle Grace docs must also brace for the arrival of 200 injured 757 passengers, and their concerned families. Miranda is a little spooked when she learns it’s a flight she’s taken with her son, regularly. Luckily, she has dreamy Nurse Eli to help her keep her cool.

By the end of the finale, however, she may be the only one that has someone to depend on. “All these relationships that we thought were so strong, we’re going to see them all crack and crumble,” Drew warns.

The Grey’s Anatomy finale airs tonight, Thursday, May 19, 2011 on ABC at 9 p.m., followed by the Private Practice finale.