The Social Network‘s Armie Hammer has landed the title role in The Lone Ranger! Disney’s big screen adaptation of the popular TV show will have the young actor working opposite Johnny Depp as Tonto. 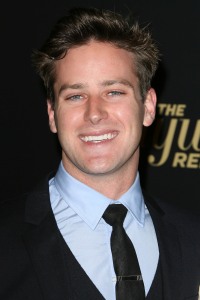 Disney searched high and low for someone strong enough to act alongside Johnny Depp and they’ve finally found him. Armie Hammer, who’s best known for playing a set of twins in David Fincher’s The Social Network, beat out countless actors to get the part.

The Lone Ranger is a crime fighter known for wearing a black mask, riding horseback and hanging out with his trusted sidekick Tonto. You might be asking yourself, how can Johnny Depp play sidekick to anyone? According to an interview Depp gave Entertainment Weekly, his version of Tonto will be more of an equal than a subordinate.

He said, “I started thinking about Tonto and what could be done in my own small way [to] try to — ‘eliminate’ isn’t possible — but reinvent the relationship, to attempt to take some of the ugliness thrown on the Native Americans, not only in The Lone Ranger, but the way Indians were treated throughout history of cinema, and turn it on its head.”

Production on The Lone Ranger is slated to begin after Depp wraps Tim Burton’s Dark Shadows and Hammer finishes Snow White. A final release date hasn’t been set for The Lone Ranger but it could debut as early as fall 2012.

Hammer and Depp sound like a good-looking match made in heaven.

Check out Johnny Depp’s interview with us for Pirates!>>