Former America’s Next Top Model judge and Celebrity Rehab patient Janice Dickinson avoided a crisis when she was able to scrounge up her false teeth after losing them at a Southampton restaurant. Say what? 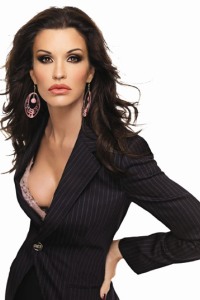 It’s not her mind that Janice Dickinson lost, but rather her teeth. While dining at the posh Southampton restaurant Sant Ambroeus, the former model/reality show judge/rehab patient misplaced two of her false teeth.

Dickinson was having lunch with a friend when she removed two of her temporary teeth and put them in a napkin, Page Six reported. “I was so excited talking to [my friend] that I put my teeth in my napkin, and then I couldn’t find them! Did they fall into the soup? These things are so expensive they could feed a small village,” Dickinson said.

Not one to be wasteful, Dickinson hit the deck and began scrounging around under the restaurant table — or, as she said, “diving under the table like a porpoise” — in a frantic effort to locate her missing teeth.

In her usual fashion, Dickinson didn’t embark upon a quiet search. Fellow diners asked her whether she lost a contact. She apparently asked for help with the tooth hunt. “I was under the table and it was sticky,” Dickinson said.

Fortunately, she found her teeth, went to the bathroom to rinse them off and popped them back in her mouth.

“Age sucks,” Dickinson said. “And thank God my boyfriend wasn’t there… OMG, no one wants a snaggletooth.” Dickinson, who is 56, is dating 32-year-old David Blakely. We’re also guessing Blakely is glad he wasn’t there for Janice Dickinson’s missing tooth debacle!