They’re back! Kermit, Miss Piggy, Fozzie Bear… The Muppets have a brand new movie and Disney has just unveiled the first movie poster for the film. 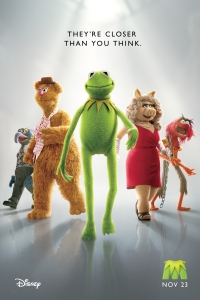 It’s been years since Jim Henson’s Muppets have made us laugh on the big screen and even longer since The Muppet Show was on television. But Kermit, Piggy, Fozzie and the gang have never left pop culture. Now we’re getting a new film starring Jason Segel, Emily Blunt, John Krasinski, Amy Adams, Zach Galifianakis and more.

SheKnows was lucky enough to visit the set a few months back and we can tell you that we’ve never seen a team more into a film than this one. Especially Jason. And we’re over the moon about the return of the fuzzy little guys. (We also lost our minds a bit on the set as we posed for pictures with Kermit and Piggy. Kermit told us to move close to him for the show. Piggy said, ”Not too close!”)

Well, Disney has just released a brand new poster for The Muppets, with Kermit, Piggy, Fozzie, Animal and Gonzo against a white background, looking cooler than ever. This time around, they’re uniting to save their beloved theater from an oil tycoon.

The Muppets opens November 23. So, are you guys as excited as I am? What was your favorite episode of The Muppet Show? Mine is a toss-up between the Star Wars episode and the one with Alice Cooper.