Shocked by the news of Arnold Schwarzenegger and Mildred Patricia Baena’s love child? Well, hold on to your hat because according to actress Jane Seymour, there are more skeletons (and children) in Arnold’s closet poised to come out. 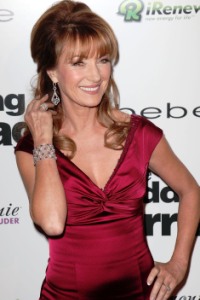 Could it be that Arnold Schwarzenegger has more illegitimate children? For Maria Shriver’s sake, we hope not!

Perhaps the only person not surprised by Arnold’s affair with one of his household staff is actress Jane Seymour. “I was not even remotely surprised,” she told CNN during the red carpet premiere of Love Marriage Wedding on Tuesday night. “The moment I heard it, that there was an announcement of their separation — he was obviously jumping the gun before everyone else told the world of the news.”

Jane Seymour then went on to predict that Mildred Patricia Baena is only the first of many women who will soon be coming out of the woodwork, claiming to have had affairs with Arnold or having a child with him.

“From what I gather, I think there will be lots of information coming people’s way,” Jane continued. “I heard about two more [out of wedlock kids] somebody else knows about. I even met someone who knows him well.”

We’re not going to go as far as to say Jane Seymour is wrong about there being more Schwarzenegger love children (remember when the Tiger Woods scandal broke and women started coming forward left and right?), but isn’t it a little tacky to gossip on the red carpet? If Jane and Maria Shriver were friends beforehand it’s doubtful they’ll continue to be now!

What do you think of Jane Seymour’s prediction that there is more than one Arnold Schwarzenegger love child?