AI executive producer Nigel Lythgoe is fed up with conspiracy theorists who claim the American Idol vote is rigged. After years of trying to prove his television shows are run fairly, Nigel admits the ‘megalomaniac’ fans are driving him crazy! 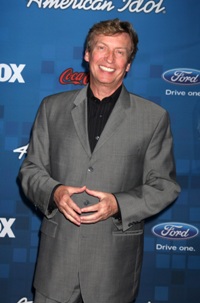 “The ones that believe we manipulate everything, it drives me crazy sometimes,” Nigel said when he sat down with MTV on Monday. “‘How dare you let James go from Idol!’ ‘We know that you hate Haley!’ This is just crazy. I always end up having to go, ‘You morons out there… ‘ or something like that, and realize that I’m arguing with seven or eight-year-olds from Wisconsin.”

Nigel Lythgoe went on to explain (at length) that some things are intentionally coordinated on American Idol, such as the performance order. “James [Durbin] opened the week before,” he said. “He opened it again [last] week, which is not the great spot to be in, and then we changed him to the last [for the second song], so it was fairer. So when Standards and Practices said to us, ‘Why is he opening twice?’ Well he’s opening twice because there are four songs in that first genre, he’s the uptempo one. You don’t want to open the show with a ballad, so you start with an uptempo song. And he’s last because he’s due to be last, because he’s opened the show for two weeks now.”

“That was all it was,” Nigel concluded. “God forbid logic comes into a megalomaniac fan that just wants their number one to win and everything else is: The world’s against them!”

Do you believe the American Idol vote is rigged?