American Idol alum Katharine McPhee is set to bring her sweet songs to television in the new show Smash. Check out Katharine’s retro look as her character, Karen! 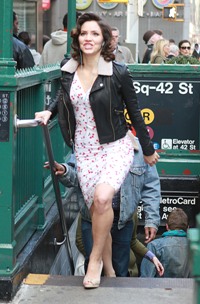 Katharine McPhee may have sung her last American Idol song in 2006, but her career continues to grow in new directions. Beginning next year you’ll be able to see Katharine as her new character Karen in NBC’s new show Smash.

The show revolves around a group of characters who come together to put on a Broadway musical, which will be based on the life of Marilyn Monroe. But before that can happen, the people who will try to bring it all together must deal with their own personal acts.

Katharine McPhee’s character Karen hails from Iowa and after a successful audition, she becomes the favorite for the role of Monroe. The 27-year-old, seen here filming the Smash pilot in March, told Access Hollywood, “It’s literally a dream come true to be able to sing, and act and be able to dance too… I’m living my dream.”

Katharine was the runner-up during the 2006 season of American Idol, losing out to Taylor Hicks. The tenth season of the series is coming down to the wire with just three contestants remaining. Either Scotty McCreery, Lauren Alaina or Haley Reinhart will be the American Idol 2011 winner!

Congratulations to Katharine McPhee on her Smash role, and best wishes to the current remaining American Idol hopefuls!