The American Idol top three had some tense moments this week, but it wasn’t all frown lines and focus. A few funny moments stole the show during the big night. 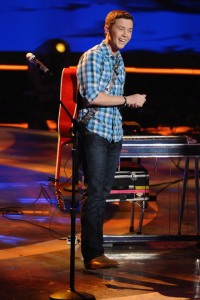 Scotty McCreery, Lauren Alaina and Haley Reinhart sang their hearts out for a chance to be in the American Idol finale next week. It wasn’t all serious bravado, though. Did anyone else notice a few moments that broke the tension during Wednesday night’s performance show?

Haley Reinhart came out swinging with her performance of Led Zeppelin’s What Is and What Should Never Be, but halfway through she got a bit wobbly and stumbled — not on the lyrics, on the stage. She fell to her hands right in front of the judges. It was pretty funny, until she got back up and ate the stage alive — we stopped laughing immediately. As Steven Tyler said, “It’s not how many times you fall, but how many times you get back up.”

Okay, our next moment comes to us courtesy of Scotty McCreery and Jennifer Lopez. After he got done singing his cute little butt off, Jennifer Lopez turned serious and asked him to do her a favor — shave his head like when they first met. Ryan Seacrest offered up the clippers backstage.

Our last tension-breaking moment of the evening came from Lauren Alaina. Normally, the contestants come out on stage and gab with Ryan Seacrest while sitting on one of the stools. As the camera cut to Lauren, an American Idol staff member was applying leg shimmer to her legs. Why, you ask? She ripped her pantyhose. Don’t act like it’s never happened to you.

Did you catch any of the funny moments during American Idol’s top three show?