Justin Timberlake & Lady Gaga are heading to Saturday Night Live for the May 21 season finale and the promos have dropped! In the new clips, Timberlake gets goofy with his [Expletive] in a Box duet partner, SNL cast member Andy Samberg.

Whether clocking in at Saturday Night Live as guest host or just showing up for a quick cameo, Justin Timberlake definitely ranks among the fave SNL visitors — and not just for his work on Emmy-winning [Expletive] in a Box or Mother Lover, the songs he created with Andy Samberg’s Lonely Island team. 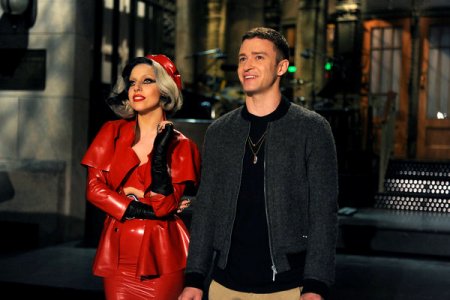 Whether Timberlake is raising money for Homelessville, doing the Single Ladies dance in a leotard or playing Robin Gibb to Jimmy Fallon’s Barry, he delivers. Perhaps it’s that Disney training…

Of course, with the success of Timberlake and Samberg’s goofy musical stylings, it’s no surprise the new promo clips feature the boys being silly. After Samberg begs to make out with Timberlake and “give the people what they want” (not!), the two guys dress as their fawning twin sisters and have a belated Halloween scare.

Absent from the promos is SNL musical guest Lady Gaga, but we hope she gets in on the laughs during the show this weekend. During her October 2009 visit to SNL, the diva rumbled with Madonna herself in a Deep House Dish sketch.

The Saturday Night Live finale with Timberlake and Gaga airs on NBC May 21, 2011. In the meantime, check out the promos below.