The top three American Idol contestants aren’t the only familiar faces at risk of their last night on the show. Time is running out on host Jennifer Lopez’s contract! 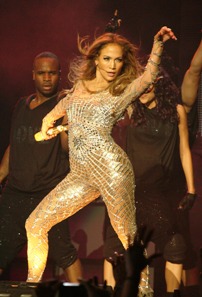 Among the reasons for Jennifer Lopez to stay on as an AI judge are the salary — she raked in a whopping $12 million to judge this season — and the increased visibility she has gained from being part of the television series.

One source is quoted as saying the chance Jennifer will return for a second American Idol season is pretty good. “She knows what Idol has given her, but she also knows how to work it to her advantage,” Earsucker reports. “She’s been around the block, so to speak before and knows how to negotiate. I’d estimate there’s a good 80-90 percent likelihood of her returning as judge next season.”

On the negative side are Jennifer Lopez’s other commitments. The 41-year-old, seen here performing on May 14, just released her latest album Love? two weeks ago. And let’s not forget she might want to spend a little time with husband Marc Anthony and their three-year-old twins Max and Emme!

Would you like to see Jennifer Lopez return for a second season of American Idol?