James Durbin surprised fans and judges when he was sent home from American Idol. Could former Idol star Adam Lambert’s comments have contributed to his ousting?

Former American Idol contestant Adam Lambert didn’t hold back when discussing the season 10 contestants. In fact, some say his comments about James Durbin could have cost the singer the show! 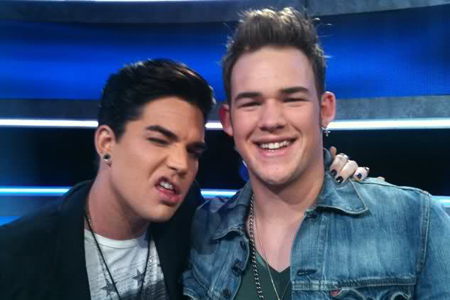 Lambert was initially complimentary of Durbin, tweeting: “Durbin sounded bad (expletive) tonight! Lot more control! And while we both have a rock scream I think we’re pretty different stylistically.”

He changed his tune somewhat, telling The Hollywood Reporter that he was “kind of over” Durbin, whom he has often been compared to.

“I think he’s got talent and passion 100 percent, but I feel like he’s trying way too hard,” Adam says. “Also, his niche is so limited with the metal. When he did that Heavy Metal song [by Sammy Hagar], James was note-perfect. He was on pitch, which is usually kind of an issue, and I think he sounded really good, but it felt like a copycat. I didn’t feel like I was seeing an original artist yet. And I’m not saying he doesn’t have that in him, but it hasn’t been showing. Whereas Haley and Casey, they’re bringing a little more legitimacy to it. They’re more grounded in their own voices. When they did that jazz duet, that was nuts! They give off a good vibe.”

Durbin had said that Lambert’s American Idol performances had inspired him to try out, so he was understandably hurt by his diss.

“I was nothing more than nice to that guy and, you know, he decided to take it to a different level. So, whatever,” Durbin told MTV.