Ashton Kutcher says he is totally stoked to be cast in Charlie Sheen’s place on Two and a Half Men, comparing his new gig to winning the lottery. 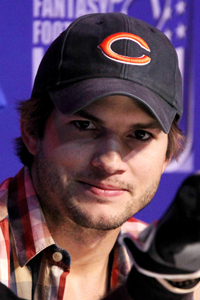 If anyone is #winning around here, it isn’t Charlie Sheen. Ashton Kutcher says being cast in Sheen’s place on Two and a Half Men is like winning the lottery, and he “could not be more excited” to get started on his new gig.

“I’ve never probably in my 13 years in show business received more phone calls and e-mails from people congratulating me on this job. You’d almost think I won the lottery or something, which I kind of did,” Kutcher said at the CBS upfronts on Wednesday. “I’ve got the best job in show business, and I am ecstatic about that.”

He isn’t kidding: At a reported $900,000 per episode, Kutcher really will make out like a lottery winner — hopefully without the lottery curse.

As for his costars, Jon Cryer for one is also psyched — but wishes he wasn’t the shortest guy in the cast.

“I’m incredibly happy they’re bringing Ashton to the show, but the question that I have to ask is, ‘Did you have to get the tall guy? Really? Is that necessary?'” Cryer joked. “But I brought myself to a place of incredible excitement about our new beginning, which I refer to as One and Two Half Men.”

Production on the revamped series, the premise of which is being kept a closely-guarded secret, will begin in the fall.