Jack Black would love to do a third Kung Fu Panda movie because, he says, it’s pretty much the sweetest job ever. 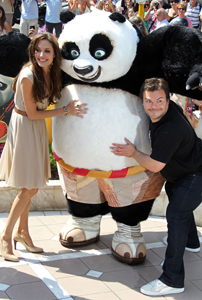 Hard to believe it was way back in 2008 when Jack Black totally ruined Angelina Jolie’s baby news by letting it slip that she was pregnant with twins while in Cannes promoting Kung Fu Panda. Flash forward to today and the pair is back in Cannes promoting Kung Fu Panda 2 — but the only news Black has to spill is that he would love to do a third movie.

“The thing is these movies are so huge that they can’t just do amazing,” Black said. “It has to do gonzo record-breaking crazy money. So if it does do that, there will be more.”

“I’d love to do it for the next 20 years,” he continued. “Dude, it’s the sweetest job. If you can get a kickass voice role in an animated classic, it’s about as good as it gets.”

Unfortunately he didn’t have any insight into the state of Angelina Jolie‘s uterus this year.

“I have not been given any scoops to accidentally drop this time,” he joked.

Kung Fu Panda 2 will be released in theaters on May 26.