Camille Grammer says there is no way she is letting ex-husband Kelsey Grammer have custody of their two kids — because he’s a terrible father! 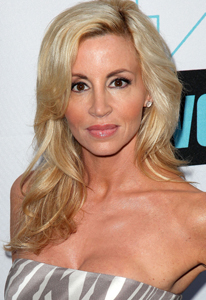 The Real Housewives of Beverly Hills star Camille Grammer was shocked when her no-good ex Kelsey Grammer filed for full custody of the couple’s two kids. Now Camille is blasting the move, saying the kids have made it crystal clear that they want to stay with her — because he is a terrible father.

Camille says she will “fight like hell” to keep the kids with her in California — “exactly where the children wish to be,” according to TMZ.

She is so adamant about this because, Camille Grammer says, the actor “abandoned his family and fathered a child out of wedlock… which speaks volumes about his parenting.”

Agreed. She may also be so adamant about it because if Kelsey gains custody, she loses out on thousands of dollars in child support every month.

Regardless, Camille says this latest stunt by Kelsey Grammer is merely “another act of creepishness and chutzpah.”