Kristin Cavallari is, like, so totally over The Hills. She told Ryan Seacrest that most of her MTV castmates won’t be invited to her wedding. 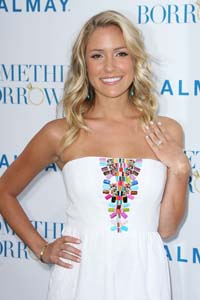 “No,” Cavallari told Ryan Seacrest when he asked if Lauren Conrad and the gang made the cut. “I just don’t talk to these people on a regular basis.”

However, former flame Stephen Colletti will be there, as will Stephanie Pratt and Audrina Patridge.

Gasp! Cavallari also told Seacrest that her relationships with Jenner and Justin Bobby Brescia were fake, even though she did date Jenner for a while.

The Hills — fake? Color us shocked!

As for the wedding, Cavallari and Cutler are planning a spring 2012 ceremony.

“It will probably be next spring because of the football season,” Cavallari said at the Los Angeles premiere of Something Borrowed. “It would either have to be in the next couple months or next spring — so about in a year.”

“I just started ripping out pictures in magazines,” Cavallari said of her wedding dress plans. “I know that I want my dress to be a little bit tighter on the top and then kind of go out.”

And for the haters who think they got engaged too quickly?

“It just really does feel right,” she told Seacrest of Cutler’s Easter weekend proposal. “My parents are divorced so I’m extra careful about it. But I’ve never been so sure about it.”

Just don’t expect there to be a reality show about her wedding.

“Not going to happen,” Cavallari said. “Jay hates all that stuff.”

Do you think Kristin Cavallari should invite her co-stars from The Hills to her wedding?