Is the real reason actress January Jones won’t identify the father of her baby due to the fact that he’s married? If Jones’ baby daddy is a married man, it looks like the Mad Men star is doing a good job of keeping his identity a secret. 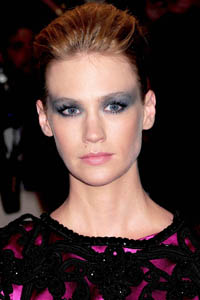 Who’s the father of pregnant Mad Men actress January Jones‘ baby? That’s the question everyone’s been asking since the beautiful blonde got knocked up.

Initial reports suspected that her most recent ex-boyfriend, Saturday Night Live‘s Jason Sudeikis, was the dad, and Jones had decided to raise the baby by herself.

But, it turns out, the reason Jones has been so tight-lipped about who impregnated her is because he’s a married man!

Supposedly, the father-in-question and Jones worked together on X-Men: First Class. The male lineup of actors in the movie includes James McAvoy, Michael Fassbender and Kevin Bacon. Of course, there’s the male crew to consider, too.

For those who ruled out any possible candidates based on the fact that he’s married, you’ll have to guess again.

As The Daily notes, Jones announced her pregnancy on April 28. She’d been photographed holding large purses placed strategically over her stomach up to that date, and not long after, she showed off her growing baby bump for all to see.

“She’s really looking forward to this new chapter in her life as a single mom,” her rep stated, which made it sound like Jones had chosen to go it alone. Now it looks like she may have been deflecting attention from her baby’s father because if his identity goes public, it could break up his marriage.