The first photo of Oscar nominee Jennifer Lawrence as Katniss in Hunger Games has just been released. 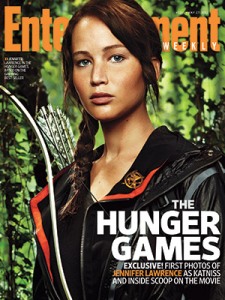 Not a day goes by without some sort of news on the highly anticipated film version of the Suzanne Collins novel Hunger Games, whether it’s casting news or debate about who’s playing whom. Well, today we’ve got some info and a shot from Entertainment Weekly.

If you’ve been living under a rock, here’s the deal. In the dystopian future, North America has been turned into Panem. The powerful government, based in the central city called the Capitol, is desperate to keep the populace in check. To make sure people know that no one is beyond the reach of the government, they hold a televised event in which a child from each district fights to the death. Yeah, this is a dark one.

And speaking of dark… fans were worried about the casting of Jennifer Lawrence. Katniss is a brunette. (And hair dye isn’t exactly hard to come by… not sure why it was such a big deal.) In the new photo on the cover of Entertainment Weekly, Lawrence sports a dark braid, with a bow and arrow in her hand, a quiver of arrows on her back and a mockingjay pin on her shoulder.

In the accompanying interview, Lawrence said she had mixed emotions about taking a role that was so high profile. (Understandable — look at the Twilight kids.) She also talks about meeting director Gary Ross for the first time. ”I just kind of opened up and said, ‘I feel like a rag doll. I have hair and makeup people coming to my house every day and putting me in new, uncomfortable, weird dresses and expensive shoes, and I just shut down and raise my arms up for them to get the dress on, and pout my lips when they need to put the lipstick on.’ And we both started laughing because that’s exactly what it’s like for Katniss in the Capitol. She was a girl who’s all of a sudden being introduced to fame. I know what that feels like to have all this flurry around you and feel like, ‘Oh, no, I don’t belong here.'”

So, are you guys excited for Hunger Games? Have you read the books? Let us know below.