Beyonce will drop her anticipated Run the World (Girls) music video on American Idol tonight! She called it “risky” and hinted it would be more “futuristic.” We can’t wait!

The first song and music video off of Beyonce’s upcoming album 4, called Run the World (Girls), will premiere on tonight’s American Idol. 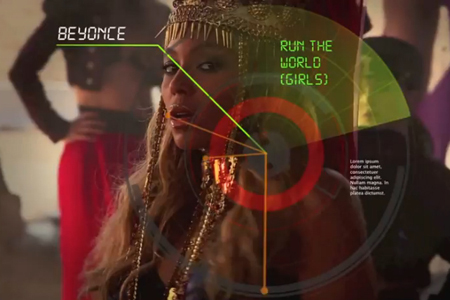 “It’ll be big, it’ll probably be one of the bigger Beyonce music videos ever done,” director Francis Lawrence told MTV News. “And I can say that I think the song is unbelievable. I think the video’s gonna be really fun and cool and different for her.”

The video was originally slated to be released last Friday, but Beyonce was still putting the finishing touches on it and it wasn’t quite ready — until now!

What can we expect in her new video? Beyonce and her “supermodel minions” will be dressed in high fashion looks from Givenchy and Norma Kamali as they are fending off the opposing army in a post-apocalyptic world. Pretty fitting with the whole May 21st doomsday looming upon us!

“It’s definitely riskier than something a bit more… simple,” Beyonce told Billboard.com. “I just heard the track and loved that it was so different. It felt a bit African, a bit electronic and futuristic. It reminded me of what I love, which is mixing different cultures and eras — things that typically don’t go together — to create a new sound. I can never be safe; I always try and go against the grain. As soon as I accomplish one thing, I just set a higher goal. That’s how I’ve gotten to where I am.”

Check out a sneak peek of the Run the World (Girls) video and see the entire video tonight during American Idol: