Fresh off his breakup from model Bar Refaeli, Leonardo DiCaprio was spotted hanging out with Blake Lively at the Cannes Film Festival. Just friends — or is it a fling? 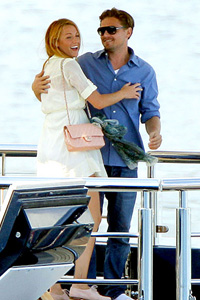 Blake Lively is single, ending her relationship with Penn Badgley, and Leonardo DiCaprio split with model Bar Refaeli this month — so is the newly single pair making a love connection in Cannes?

The New York Post reported that the Gossip Girl star was spotted flirting with Leo at Jeremy Renner’s birthday party back in January. It appears like they have reconnected in the romantic French city of Cannes.

A source spotted them walking around the Hotel du Cap Eden Rock on Friday night.

“She was wearing white and he was in a baseball cap,” an insider revealed. “They walked around the grounds together. It looked like they were a couple.”

On Tuesday, Leo and Blake were photographed hugging on a yacht in France. They seemed friendly with each other, as he had his armed wrapped around her and she had her hand affectionately placed on his chest. They weren’t the only ones on the boat, however. Steven Spielberg and actor Lukas Haas were also enjoying a boat ride in the French Riviera.

Leo usually sticks to dating models, after all he dated Bar for five years — and dated supermodel Gisele Bundchen before her.

But wait — Blake is the new face of Chanel, which technically makes her a model. I smell a new romance!

Tell us: Do you think Blake and Leo make a cute couple?