Two children of Arnold Schwarzenegger and Maria Shriver have tweeted their reactions to the news that their dad secretly fathered a child with another woman.

When parents behave badly, it’s always the children who pay the heaviest price. When news broke this morning that Arnold Schwarzenegger has a secret child with a longtime household staffer, thoughts immediately turned to his four children with wife Maria Shriver. How did they take the news? 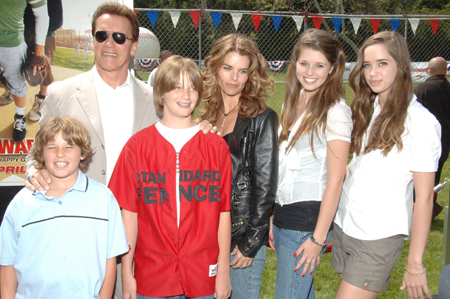 It’s the way of a new generation: While Maria Shriver issued a formal statement through her publicist, two of her four kids made theirs through Twitter.

“Some days you feel like [expletive], some days you want to quit and just be normal for a bit,” he wrote, quoting the lyrics of the Fort Minor song Where’d You Go, “yet i love my family till death do us apart.”

Daughter Katherine weighed in later in the day.

“This is definitely not easy but I appreciate your love and support as i begin to heal and move forward in life,” she wrote. “I will always love my family.”

No comment so far from the couple’s two other children, Christina and Christopher. Schwarzenegger and Shriver announced their split last week.

50 mins ago
by Ellen Niz