Ke$ha took to Twitter Tuesday afternoon to make a weird request: She wants fans to send her their teeth! 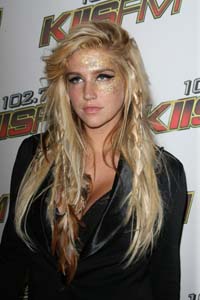 Oh, Ke$ha. We have a love/hate relationship with the singer. Sure, she’s a little out there with her love of glitter, weird hairstyles, hot pants and dirty boys — but this takes the cake.

That’s right: Ke$ha is asking her fans on Twitter to send her their teeth.

“I’ve received 1 tooth from a fan. I made it into a neclace [sic]. But now I really wanna make a fan tooth necklace to wear to an awards show,” the Tik Tok singer tweeted Tuesday afternoon. “So. What I’m getting at is please send me your teeth. I’m dead serious. I need your teeth.”

Are you doubting that Ke$ha is being sincere about her quest for chompers? She’s not — and she’s the only person we’d believe is weird enough to ask for them.

“Wisdom teeth?? Cmon. Yall got some of those laying around,” she asked.

So, if you have some teeth just sitting around, why not send them to Ke$ha? She posted her toothy address as:

At least your teeth can get some TV time. Just don’t go pulling out your teeth for her — now that would just be silly.

Seriously now: Would you ever send a celebrity something so personal?