Lil Wayne is in a small and select group of hip hop artists that have had the honor of filming MTV Unplugged. The rapper puts on an awesome show and opens up about his jail time.

Lil Wayne has joined an elite group of hip hop artists, including LL Cool J, Jay-Z, Lauryn Hill and B.o.B., that have been a part of MTV’s Unplugged. 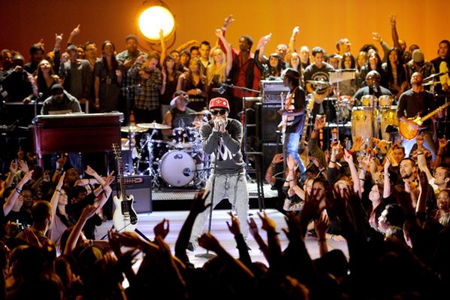 “It was humbling just to be a part of. As an artist that’s watched the game as closely as I did, to be on Unplugged is a high honor,” Wayne told the LA Times. “I’ve gotten people that haven’t texted me in a long time, text me today saying congratulations. It is that kind of thing. I felt great about it.”

Lil Wayne spent eight months behind bars for attempted gun possession from an arrest in 2007. He released his last CD, I Am Not a Human Being, while in jail — and it went on to debut at number two on the Billboard chart.

During his Unplugged performance, Lil Wayne used music to tell his stories. “A few months ago I was in a dark place that I don’t like to really shed light on,” he told the audience. “Everyone always asks, ‘How was it?’ I figured I’d find a way to answer that question.” He then went into a cover of 2Pac’s Hail Mary.

He also hinted about his upcoming album, slated for a June 21 release. “Just know that I have a pleasant surprise. A very pleasant surprise for this album when it comes out,” Lil Wayne said. “I’m only doing this for the fans. Which I do every… thing for.”